Also known as Smart Home or Domotics, “HA” integrates any or all of the products below making your property intelligent, convenient, secure, and environmentally friendly.

Lighting Control Systems:
Connect all interior and exterior lights to central dimmers. Scenes are programmed and activated by sensors, timers or buttons on a User Interface (see below).
Audio-Visual Systems:
Audio-Visual Systems combine several components for use as stand-alone applications in a home theater or bedroom, or as distributed applications in dining rooms.
User Interfaces:
User Interfaces are simply Keypads (switches) discretely placed in convenient locations, iPads, and smart-phones.
Communications Systems:
Include telephones, wired and wireless data networks, and intercom systems that may include video.
Automation Control:
Activates motors to open doors or gates, draw curtains, shades or blinds, and raise-lower a TV or projector screen.
Climate Control:
Climite Control sets the air-conditioning in each room, adjusts ceiling fan speeds and activates extractor fans in bathrooms.
Security Systems:
May be as simple as motion sensor lights, or a larger system containing Surveillance cameras, and a burglar alarm. 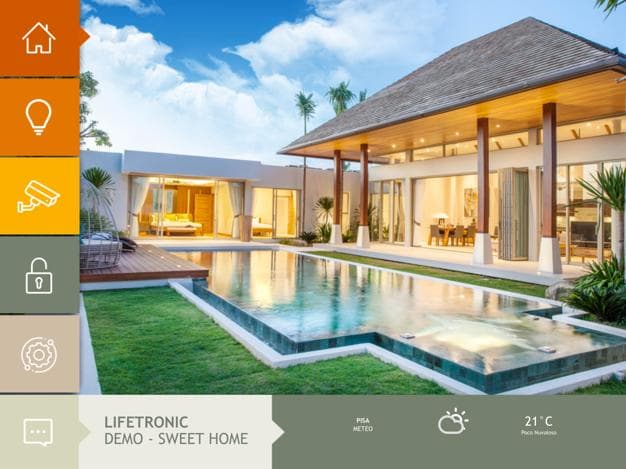 While the above options may sound complex, the end-user only needs to deal with the simple-to-use buttons on a User Interface.